The Crofton Pond incident of 2002 brought into focus an interesting fish, until then not so popular in the Americas.

The National Geographic Channel refered to it as “FISHZILLA.”

One might wonder, what made people take notice of this previously unheard of or lesser known Snakehead Fish.

Snakeheads are more amphibious than aquatic in nature. A native of Asia, somehow this fish found its way into the ponds, lakes and falls of various states creating havoc to the extent that the state governments were ready to pay hundreds of dollars for a single dead fish.

SNAKEHEAD Fish – WHAT ARE THEY?

Snakeheads are a freshwater fish commonly found in Asia and Africa. The most special feature of this fish is its ability to survive outside water. They can crawl on to land and can survive up to 4 hours. They belong to the taxonomical order perciformes, which means perch like or ray finned. 40% of all bony fish belong to this order. These fish are also called Channa, which is the generic name given to all the snakeheads. There are over 30 to 35 identified species of snakeheads. The most popular among them are the Channa maculata, Channa asiatica, Channa micropeltus, Channa striata and Channa argus. 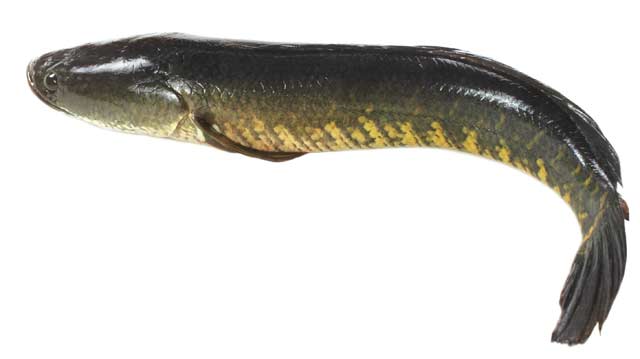 WHERE DO THEY COME FROM?

Snakeheads are believed to be over 50 million years old species. They originated in the southern part of the great Himalayas of the Indian subcontinent where fossil records were discovered in the mountain ranges. The snakehead was believed to have spread to central and western Eurasia. From these locations they spread to Africa and East Asia during the late Tartonian era. The efficient climatic adaptability of this fish made its spread easier. In the recent historic past, the nativity of each species and its spread to the American continent has been deduced.

The common snakehead is the Channa striata and it is more widespread than any species. They are native of South and Southeast Asia. They were introduced to the island east of Wallace, Pacific Islands and Madagascar in the latter half of 19th century through government programs. They are currently widespread in most of India, South China, Pakistan, Bangladesh, Sri Lanka, Philippines, Mauritius and other parts of South East Asia. Channa maculata is popularly called the blotched snakehead. It is a native of North Vietnam and Laos. In the first part of nineteenth century Channa maculata found its way into Madagascar and Hawaii. These are invasive species. Channa asiatica is a native of South China and was introduced to Taiwan and South Japan. Channa micropeltus is a popular freshwater fish of South East Asia and India. It is commonly known as the Red Snakehead or the Malabar Snakehead. It is a Giant Mudfish.

The northern snakehead or Channa argus is the most aggressive and invasive species amongst all. It is one of the most commonly smuggled snakeheads. It was found in Japan a century ago but it is native of North China and was introduced to Central Asia. In 1960, Our attempt to cultivate Channa argus in Czechoslovakia failed due to cold winters.

These fish feed on planktons, frogs, smaller fish, rats, and mollusks. Younger ones survive on aquatic insects or planktons. Adults can eat up all the other fresh water fish. Snakeheads attack their prey by ambushing them. They go prey hunting especially during mornings and evenings.

Snakeheads live in ponds, lakes, fresh water sources and rivers. During floods, they migrate to nearby fields; and during dry season, they return to permanent water bodies. They live by burrowing into the soil.

Snakeheads are a top action, adrenalin rising game fish. As rightly said by an experienced angler, “Snakeheads have the speed of a pike, territorial instincts of a bass, power of a tarpon and the brains of an old trout’’. They are very ferocious and violent. They put up a great fight when hooked. However, the action is not only in hooking them. It starts with sighting them; putting on the bait, hooking them; and then followed by some real action when the snakehead hooks on and puts up a tough fight. This is followed by unhooking the teeth and killing it.

Late May and July to December is the breeding season for snakeheads and this is when the parent snakeheads can be caught. The snakeheads are most hungry during the mornings and evening, and are on the lookout for prey during this time. This makes luring them easy during these hours.

Gear with a tough cranking power is suggested. Rods and reels should have the ability to handle heavy thrashing. Usually rods of medium-heavy weight are usually recommended only for trophy snakeheads. A braided line is recommended. Size 2 hook is preferred by many anglers.

HOW TO IDENTIFY SNAKEHEADS?

Adult Snakeheads are about one to one and a half meters in length. The young ones appear red in color and turn greenish as they grow, and finally, they grow up as golden tan or brown colored adults. The skin shows blotches. Front blotches separate between top and bottom sections. The rear blotches are adjacent to one another. There are two bar like marks at the caudal peduncle. They have a long dorsal fin with 49 to 50 rays and an anal fin with 31 to 32 rays. The head is small with a depression on the anterior aspect. It has a large mouth extending beyond the eye.

Look out for the dark shadows of the parents. Two ripples are created, first by the sipping head and the second one by the dorsal fin of the snakehead. The head comes to the surface for sipping air; as the Snakeheads are atmosphere air breathing species. They have a suprabranchial respiratory organ and a ventral bifurcate aorta, which act as a primitive respiratory system. The directions of the ripples help in locating the fish in water. The lure is cast a meter away from the mother fish and is reeled back slowly. Now, an ambush can be expected from the mother fish. A strike followed by hooking and a thrashing, violent action can be expected next.

Then, the father snakehead guarding in close proximity is targeted. For this, top water lure is cast over the fry. The father snakehead expecting a danger strikes hard. The fry is spotted by the surface ripples disturbing the water. This method is similar to Bass Fishing.

A THREAT TO THE ECOSYSTEM

An ecosystem survives on the theory of survival of the fittest. The Snakehead Fish is a top tier predator, which means it is the strongest in that particular ecosystem ,pond ecosystem or the fresh water ecosystem, and has no natural rivals. This in turn leads to a kind of dominance in which the Snakeheads continue on multiplying killing other species. As a result, the ecosystem becomes infested by snakeheads and poses the risk of extinction of various other species.

This caused panic among biologists and the Environmental Conservation Department. In June 2002, Northern snakeheads were reportedly found in Crofton Pond in Maryland. The media believed it to be some alien species which had the potential to destroy native species and its amphibious nature intensified the panic levels. Fear of children and pets being hurt by Snakehead Fish became an issue. This was followed by a mass eradication program in which the pond was poisoned by a rotenone formulation. This had a half life of 3 days. The entire pond was drained; the dead fish were processed and discarded. This action resulted in the killing of 2 adults and about a 100 younger snakeheads.

In 2004, 19 were captured and killed in Potomac. In 2008, Ridgebury Lake was infested with Northern Snakeheads. The entire lake and nearby ponds were poisoned by legumine. In 2008, a fish farming accident lead to the release of Snakeheads in the drainage ditches in Arkansas.

In South India, Thailand and Indonesia, Snakehead Fish are a staple food. The fish is cultivated in fish farms across South East Asia, China, and India. This fish is barbecued in Thailand. In Malaysia and Singapore, it is popularly called Toman. In some parts of Asia, snakehead is considered therapeutic for the healing of post surgical wounds and incisions. In some parts of India, baby snakeheads are believed to cure asthma (although, it is not proven). Snakeheads are also caught to be marketed as pets. In the U.S, it is illegal to keep snakeheads as pets or import live adults or viable eggs. Currently, import of these species has also been banned.

Conservation efforts are being taken in countries like India and Thailand. In Thailand, adult fish are released back in the river by anglers to protect the species from becoming extinct. Many fishing farms across the globe are cultivating various varieties of this fish.

In today’s world, Snakeheads are viewed as an invasive species, capable of destroying native fish and disrupting the ecosystem. The media has created hype around the Northern Snakehead Fish, portraying them as alien forms, which may pose a threat to humans and other pets in future. The remarkable breeding ability of the snakehead versus the eradication efforts of the government; it is for us to wait and see what the future holds for the Snakehead.