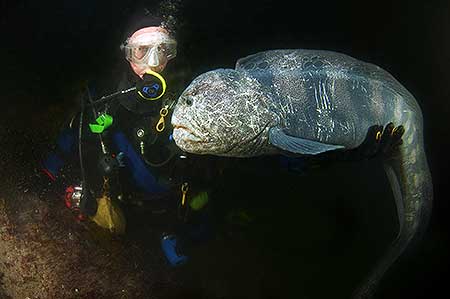 
Wolf Eel or Anarrhichthys Ocellatus, is neither a wolf nor an eel. It is in fact, a fish with the face of a wolf and the body of an Eel. Anarrhichthys in Greek means ‘a fish’ and ocellatus stands for ‘eye like spots’. Wolf Eel is one of the five species of the endangered Wolf Fish family.  It is the Pacific relative of the popular Atlantic Wolf Fish.

GEOGRAPHICAL DISTRIBUTION OF THE WOLF EEL

They are found in the Pacific coast from North Baja of California to Kodiak Island in Alaska. They are also found in Russia, Aleutian Islands of Japan, Islands of Racerocks (near the Rosedale Reef), and Imperial Beach of Southern California. They are bred near shore reefs of Oregon where they are bred in captivity.

Someone rightly said that the Wolf Eel has the appearance of a fish, eyes of a snake, jaws of a wolf and the grace of a gold fish. A Wolf Eel can grow up to 8 feet in length and weighs up to 88 pounds. The young ones of a burnt orange hue and the adults are brown or green or grey. The special characteristic of the Wolf Eel is its gender specific coloring. The females are brown in color and the males are grey in color. Not just color, the Wolf Eel also shows a gender specific spot pattern on its body. 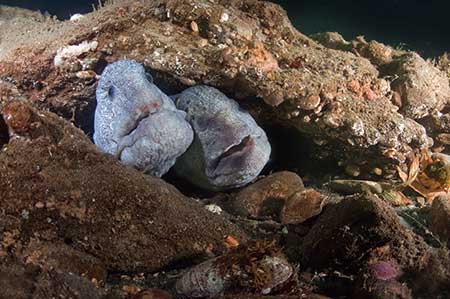 Young Wolf Eels, live on the surface of the water till 2 years of age, so that they get more air. As they grow older, they migrate deep into the sea. They are found in rocky reefs or stony bottoms. They build their nest in a crevice or a shelf or some dens or liar of a rock. They live there till the end of their life span. They are also found along the cliffs and near the docks. Wolf Eels are known to share dens with cods and other fish. At times, they are driven out of their den by large octopi.

The digestive system of the Wolf Eel, starting from its mouth, is made for the tough stuff. They are the prime predators of sea urchin and the green crab. They thrive on mussels, clams, snails, scallops and other lesser known crustaceans. They also have an appetite for anchovies and abalones.

SPORT FISHING A WOLF EEL – A CHALLENGE IN ITSELF

Although, on the average 200 Wolf Eels are caught by sports fishermen, it is not an easy task. To catch a Wolf Eel, one should select a location which is rocky and shallow. One can also fish around reefs. The fish can be found in sub tidal waters as well as deep ocean floors.

A medium sized Wolf Eel weighs anywhere between 20 to 40 pounds in weight, which means a heavy line is required. The line should be at least 40 pound test. Wolf Eels are rarely spotted on the surface. They are usually found at a depth, and hence, a long line with a leader line attached to it is required. Fluorocarbon leader lines are not visible to fish and those which are abrasion resistant can be used. 2 or 2/0 size hook is recommended for fishing for Wolf Eel.

Trawls (fishing nets thrown from a motor boat) attached with bait can also be used for fishing. Some anglers also love trolling the fish, as it is pretty heavy and a motor boat makes the task easier.

Known for eating crab and Sea Urchin, their tough jaws can crush a heavy object easily. They are fierce when forced to leave water and give a tough fight, trying to escape. This makes fishing it, an adventure of sorts.

The ideal season for fishing is the non winter months, when the fish can easily be lured away from their dens. The Wolf Eel creates an S shaped wave like pattern on the surface. Throw the casting line over the reef or rocky surface. Wolf Eels are easily attracted to bait. Hook it at the right moment. This is the crucial moment, when the fish fights off the leader, while being pulled up. Pulling up the heavy fish, while it is giving a tough fight, is a thrilling moment.

Wolf Eels are a favorite among divers. During the winter months, one can dive down to the reefs to view their activity. One can see the male and female eels nestling around the eggs protecting them from Benthic rock fish and Kelp Greenlings. The male and female wolf fish pair up at the age of 4 and live together in dens. The reproductive activity begins at the age of 7. The female lays approximately 10,000 eggs at a time. Father and mother Wolf Eels surround the eggs for about 13 to 16 weeks, by that time they hatch. When one dives down one gets to see the whitish eggs, the eel pairs, and their dens. One can witness the clash between the giant octopus or Enteroclopus dofleini as they fight for the den. Some divers also spear fish Wolf Eels. Although, the use of spear guns is illegal in some countries, various other methods for spear fishing are adopted for recreational purposes. 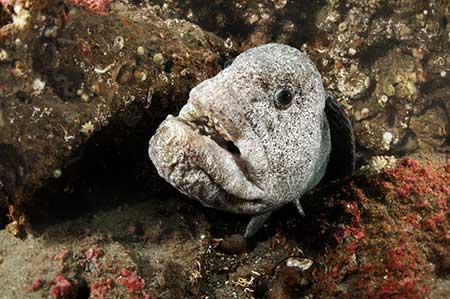 Wolf Eels are hunted for their healing power. Certain North Western American tribes reserve this fish for their leaders. They believe that Wolf Eel has great healing power. The liver oil of Wolf Eel is believed to have properties similar to the cod liver oil. Commercially, Wolf Eel is becoming a popular aquarium fish. Trawlers are used for commercial fishing purposes.

The Wolf Eel is the prime predator of sea urchins and green crab. The sea urchins multiply at a faster rate and have a negative impact on ecosystem as they disrupt habitats. Hence, the Wolf Eel is helping the ecosystem by keeping the urchin population in check.

Wolf Eel belongs to the endangered wolf fish family. These have been termed as species of concern by the National Oceanic Atmospheric Administration and National Marine Fisheries Service. The use of rock hopper trawls during commercial fishing destroys rocky reefs. Long line trawls can be used instead. Wolf Eels are often caught by fishermen by mistake in crab and fish traps. Most of the eels are caught by skiff fishermen and speared by divers. Proper treatment of sewage before discharging can protect the habitat of these creatures.

Wolf Eels can be bred in aquariums. A minimum of 50 gallon aquariumis required with rocks and hiding places. Wolf Eels are also bred in the Puget Sound and Hood Canal. Other breeding grounds include the shore reefs of Oregon.

Apart from its peculiar anatomical features, the Wolf Eels have many features, which make it stand apart from the rest of marine creatures. They survive very cold temperatures up to -30 degrees. They have a special anti freeze factor in their blood, which keeps it fluid in extremely low temperatures. They are friendly most of the time, lest, taken out of water, when they put up a tough fight and show their ferocious side. They mate for life and take equal part in brood breeding. These two features make Wolf Eels special and make them incomparable to other lower animals.