Albacore fishing at its finest! Currently Booking Tuna Trips for 2021 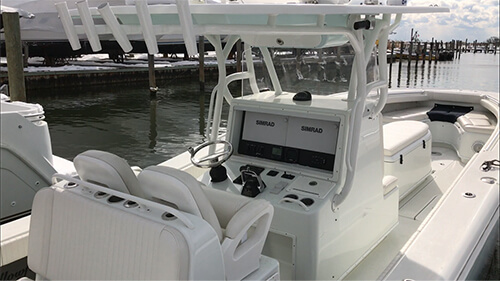 The Liberty Gun is a big fast boat and we spare no expense in getting you on the fish. Your Oregon Albacore Tuna charter is going to be first class. Join Kevin on the fast and comfortable "Liberty Gun" out of Astoria, Oregon or Ilwaco, Washington!

This 36' 7", triple 300 hp offshore fishing machine can quickly and comfortably get you to where the fish are!

Oregon’s Albacore fishery has been in existence for many years, but until the last decade, was primarily fished only by commercial boats, with an occasional charter taking clients out to fish tuna with hand lines. The rod and reel fishery didn’t really begin to blossom until the early 2000’s. 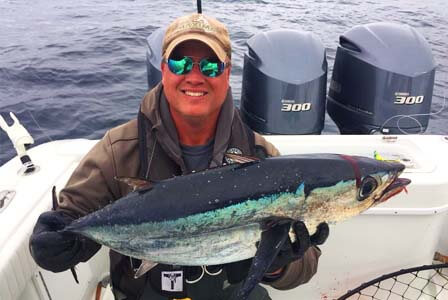 Since that time, Oregon has grown in recognition as one of the best Albacore fisheries in the country, and possibly the world. There aren’t many locations where private boats and charters regularly see 15 to 40 fish days, and quite often, considerably more! Come see what this fishery is all about, but be warned, it’s amazingly addictive! 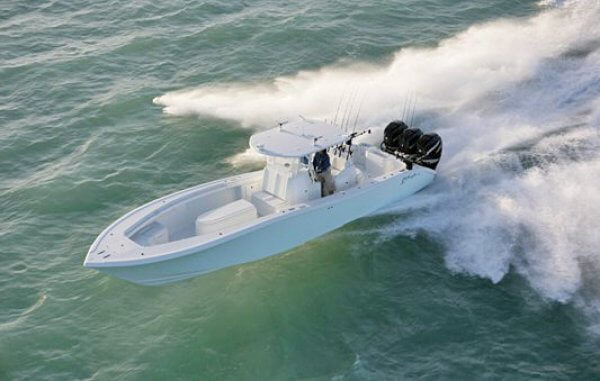 The Oregon tuna season starts around the beginning of July when the first fish begin to arrive from the mid-pacific, and continues well into October. There have been many years where the commercial fleet still lands fish into November, but the ocean has generally become too rough to target these silver speedsters. 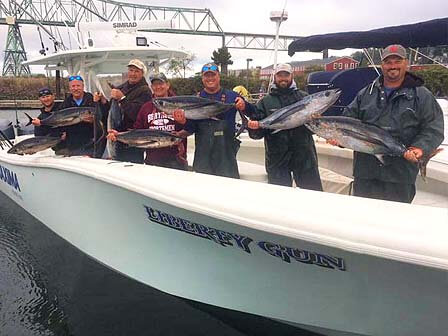 When the Albacore first show up in July they are primarily feeding on squid. This is when our troll fishery really shines. We generally run 5 to 8 lines at a time, trolling tuna jigs (7 Strand Tuna Clones, Zukers, Eat Me Lures Lolo’s, etc..), cedar plugs, and large diving plugs like Rapala X-Rap Magnums. The troll fishery is consistent until somewhere around the middle of August when we begin to see the fish switch their preference to baitfish.

As this transition occurs, we find our troll bite begining to dwindle, while the use of swim baits (both trolled and cast), vertical jigging, and live bait become a much bigger part of our game plan. During this transition period, the troll bite can still be good at times, but you have to be ready to change up your fishing technique based on the fish’s mood. As the end of August arrives, the traditional troll bite (trolling tuna jigs) is all but over for the year, and our days become centered around fishing live bait and baitfish imitations. 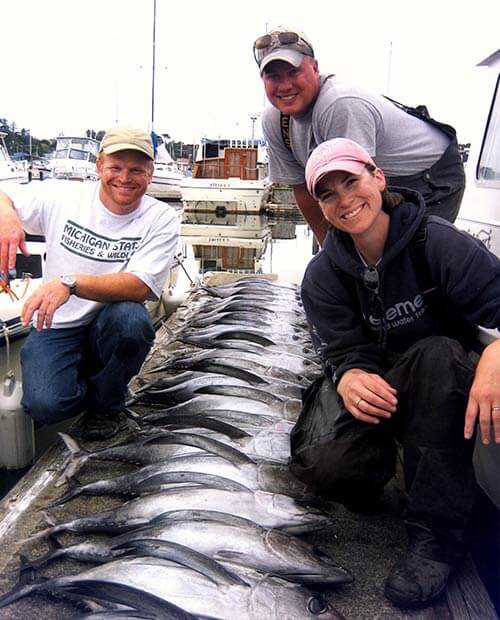 September can often be the most exciting fishing of the year. This is when our run and gun fishery blossoms!

Run and gun fishing is an exciting way to pursue these fish, combining hunting and fishing into one action packed past time. The boat cruises along offshore in areas showing signs of fish, actively looking for groups of albacore crashing bait up top. No troll spreads needed! Once fish are spotted, the boat eases up to the action, and swim baits or iron (different types of lead jigs) are cast into the melee trying to get a couple fish hooked up.

Once a couple tuna are hooked, the transition is attempted, where we chum live and dead baits at the back of the boat to lure the entire school to the transom of the boat. When a tuna school commits, and boils up at the back of the boat, true pandemonium breaks out on deck. It’s something you have to experience at least once in your life, but again be warned, this is a super addictive type of fishing!

Of course these basic seasons can change year to year. There have been many instances, where we find tuna schools up on top in July and are able to make great catches casting swim baits and fishing live bait, and we’ve had some years where the tuna clone troll fishery lasts well into September. For this reason we carry a fully rigged arsenal of rods on each trip so we can be sure to employ the necessary techniques to be successful no matter what the tuna show a preference for.

We fish from of our 36'7" Yellowfin full walk around charter boat, the Liberty Gun.

We have marine bean bag chairs for your comfort when we’re running, as well as forward, middle and stern seating that easily accomodates six anglers.

Liberty Gun is powered by triple Yamaha, 300 hp, four stroke engines, that get us to the tuna grounds quickly (40 mph cruise!), quietly and reliably. In fact, they are so quiet when idling, you have to look back at the motors to see if water is coming out of them to tell if they are even running.

We also have all the safety gear, including a satellite phone, high power vhf radio, GPS Chartplotter, FLIR Night Vision, 62 mile radar, 8 man life raft, flares, first aid kits, and life jackets, including inflatebles. Insured and bonded of course. The captain Kevin Newell is Coast Guard licensed. Deck hand Will Martin and I have considerable experience on the ocean catching Albacore and making these fun trips. 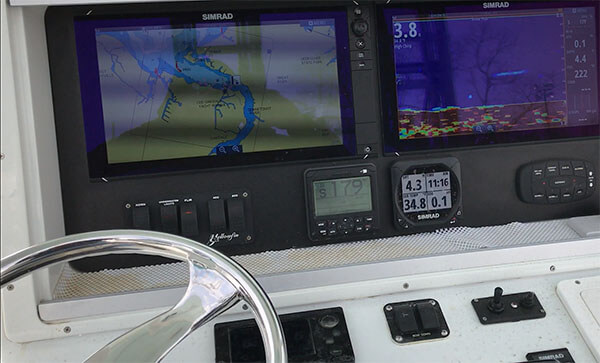 We take your safety seriously! 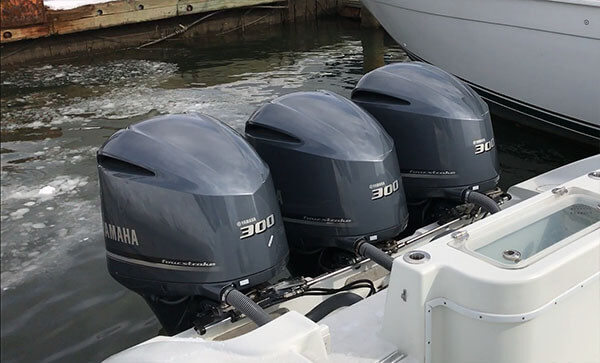 Liberty Gun also has a full compliment of fishing features! We have two Simrad 16” fish finders with five high power Airmar through hull transducers. We can actually see tuna under our boat when we are running and gunning!

Simrad Autopilot, outriggers, stereo, and a ton of fish holds. She also features enough rod storage for all the rods we carry rigged and ready to fish. She also sports two live wells, a 55 gallon and a 75 gallon. Where we can carry up to 10+ scoops of Anchovies which is a massive amount of live bait!

We take extreme pride in taking extra good care of your catch. Each fish is bled as soon as it’s brought on board, and then stored in ice in our hold or in kill bags to ensure you bring back very high quality table fare.

What’s included in your trip

We provide all bait, tackle, rods, and ice.

What you need to bring

- Layered clothing (it can be cool out on the ocean most days, close to 10-15 degrees cooler than on land, so plan for cooler weather!)

- Rain gear (even when it’s not raining the deck gets wet from both ocean spray, as well as our deck hoses. We will be constantly washing the blood from our decks, so if you don’t have raingear, you’re likely to get wet!)

- Camera (to document the amazing day you’re going to experience)

- Any personal items you’d like to have with you.

Our fishing days typically start early and run long, so plan on possibly staying overnight to recover from your exceptional fish catching day!

Processing of your catch is not included in our charter fees, but there is a filleting service in our port that will fillet and bag your fish for an additional $10 per fish.

Tuna are actually warm-blooded fish, and will typically be 4-5 degrees warmer than the water they are swimming in. For this reason it’s imperative they are cooled down once caught, they don’t cut well until they reach a core temperature of 35 degrees or so. For this reason the fillet service typically won’t cut the fish until the following day, so make sure to plan accordingly for picking up your fish.

We fish out of an exceptional boat using high caliber gear, with no expense spared, and no detail overlooked.

Our trips are typically private, we generally don't mix groups.

These are first class trips where it is just your group on the boat and the day is all about you!

We do have a handful of days per season that we set aside for mixed parties where we try to pair you up with other small groups to accomodate anglers that don't have a party of six.

Come fish with us and see what this great fishery is all about!

We cater to both the new tuna fisherman who just wants to spend a great day on the ocean catching some of these tasty fish, as well as experienced fishermen who want to learn new techniques, or who want to learn how to successfully and consistently find the fish.

We pride ourselves on not holding anything back. If you want to learn about this amazing fishery, just ask! We are more than happy to share our methods and techniques for finding and catching these fantastic game fish.