Mooching and Drifting for salmon in the Columbia River's Buoy 10 fishery! 11 years ago

How to tie the Double Uni Knot 11 years ago

How to tie the Uni Knot 11 years ago

The Shimano Tekota reel has been on the market for around a decade now and is one of the favorite reels of big water fishermen here in the NW. Even though this reel comes in a non line counter version you rarely see them in use, it’s the line counter Tekota that everyone utilizes.
I’ve used the Shimano Tekota 500 LC reel on my guide boat during every trip going on 9 years now and I’m going to share my experience and take on the good and bad regarding its construction and performance.  This is a robust reel with a lot of quality and great features but it does have some flaws and downside. We’re going to take a look at some of the advantages and disadvantages of the Shimano Tekota 500 LC.

The line counter itself is durable and with minimal maintenance, will outlast the other components on the reel during heavy use. I’ve never had the line counter mechanism fail. The only problems I’ve had with the actual line counter are fogging of the display window due to internal moisture.  On another occasion the plastic see through window covering the line distance numbers came off.
These reels hold approximately 225 yards of 65# braided line.
One downside that isn’t obvious even after using the reels for a while is that the reel needs to be completely loaded with line in order for the line counter to be accurate.  So when you break off 20 to 50 yards of line, please realize that there is going to be a difference in the amount of line that this reel says is deployed verses the other reels in your spread.  This can be a huge problem when targeting suspended fish or when fishing multiple rods down the same side of the boat.  A little bit of lost line isn’t enough to make much of a difference but if your reel has noticeably less line on it make sure you compare how much it is off so you can still keep it fishing at the same level as the others.
The “less than full” line counter problem that is inherent in this reel is also a major reason to not use the larger Tekota 600 LC unless you really plan on doing some deep drop fishing and don’t mind having to respool an extra 100+ yards onto the reel to keep its line counter accurate.  The 600 LC’s high line capacity is nice but if you don’t really need that much line, you will find it prohibitively expensive to keep filling such a large reel all the way to the top with braid every time the reel gets a little less than full.

An obvious advantage that the Tekota has over traditional level wind reels, is its large oversize handle.  This handle allows the angler to get a great grip and allows anglers without much coordination to still effectively crank fast.  New anglers find this handle style easier to use then the traditional double handle bass reel style.
The grip itself has a rubber insert that covers the metal rivet that attaches the grip to the handle.  This rubber insert has fallen out on a few occasions.  Please keep in mind that my reels see very heavy use and that this probably won’t happen to most anglers.

I do very little if any maintenance on my reels and I have never had a problem with any type of corrosion on Tekotas, they seem very impervious to salt water corrosion issues.
Fishing reels like any good tool are supposed to look good, and Tekotas look great but there is one exception to this.  The side plates of the reel are anodized aluminum but the middle section is painted.  The paint on this middle section will chip and flake off when abused, which is to be expected of a painted surface.  I don’t know why Shimano doesn’t anodize the whole reel but I wish they would because a reel with chipped up paint doesn’t look as good as an anodized surface that is scuffed up.
The line out clicker is loud but not too loud, and it holds up well to constant use.
This reel has always had an adequate drag and retrieval rate for the fish that we fish for here in the NW.  However I wouldn’t say that they have a high retrieval rate or an extremely strong drag when compared to some of the latest reels that have been created for just this purpose, but keep in mind none of these new reels have line counters.
If you use G. Loomis rods be prepared to have a constant issue with having to tighten and retighten the reel seat when using these reels.  G. Loomis needs to make a slightly larger reel seat to accommodate the size of this reel’s foot.  I don’t think this is a Shimano issue but it’s worth mentioning here.
I used to burn up or break Abu Garcia level wind reels in six to twelve months!  Now I get about 2 years of use out of a Tekota 500 LC, sometimes more.  These reels will last longer under normal use but I use them 200 days a year for every species that we fish for, salmon, steelhead, bottom fish and sturgeon.  Some of our sturgeon are 8+  feet long and fighting these huge fish is what really does a number on these reels.  I also troll heavy lead (16 to 20 oz) which also accelerates the wear and tear on these reels.  Under normal use a person can probably expect 10 years to possibly a lifetime of use.
In the event that something fails on one of these reels, I have had good success sending them back to Shimano to be repaired.  A typical repair bill is $30 to $40 and the turnaround to get them back is generally three to five weeks.
The bottom line is this, you can find a better reel to fish with but if it’s a line counter reel that you need, you will be hard pressed to find a better one then the Shimano Tekota LC series. For the longest time this has been the best line counter reel available, however the combination of durability, quality construction and aesthetics make the Daiwa Saltist a good runner up. 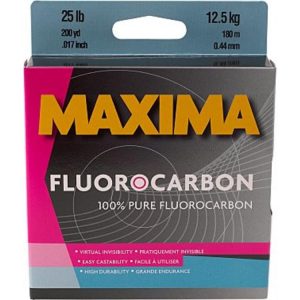 It used to be that anglers just had one decision to make when buying fishing line and that was determining how strong their line needed to be.  “Hmmm do I need 6 pound or 8 pound?”
Nowadays it’s a little tougher, there are lines that promise to do everything but clean and cook the fish!  Tougher, smoother, more visible, invisible, stiffer, thinner, abrasion resistant, and the list goes on and on.  Let’s forget about all of the features that are available across the myriad of brands and focus on one easy decision, why should I use  fluorocarbon instead of traditional monofilament line?
Monofilament is actually the term that can be generically applied to all single strand fishing lines, the more accurate term when we are talking about “good old mono” is nylon.
Both nylon and fluorocarbon are essentially plastic lines that are made by extruding hot resin through tiny holes, taking what was once a hot soup of plastic and making it into a long thin filament of line.  What makes the two products unique is the resin. It’s the stuff that’s in the soup that makes or breaks the line!


Dupont introduced the world to nylon in 1938 and in 1939 they created the world’s first nylon fishing line.  However it wasn’t until 1959 when Dupont introduced the Stren brand that nylon fishing line rose above braided Dacron to become the standard line in use by most fishermen here in the U.S.
Seaguar was the first fluorocarbon line ever made, and it has been around since 1971 when it was invented by Japan’s Kureha line company.  Seaguar eventually found its way to the United States in 1992.

Fluorocarbon is being used by more and more fishermen because:

Several years ago, fluorocarbon lines had an issue with knot strength but this is no longer the case.  More manufacturers coming on line with more advanced equipment and resins have resulted in a very high tech product with exceptional knot strength.
Ultraviolet rays from the sun, the heat of a hot car and cold winter fishing  have an insignificant affect on fluorocarbon.
Fluorocarbon will last longer on the spool than nylon.  You still have to re-spool when the line is looking bad or frayed, but with fluorocarbon you will have to do this less often.
When buying fluorocarbon lines and leaders it is important to know that even though you are buying the same brand name, you may not be getting the same line in each package.  This is a good thing because leader and main line perform different functions and need different characteristics.  The manufacturer may not be using the same resin or process to make both its leaders and lines.  Leaders are often designed to be stiffer and with less stretch whereas that same manufacturer’s line may be flexible with little memory and since it is intended for use as main line it will have more stretch.


We personally use braided main line, but use Maxima fluorocarbon leader material when fishing for salmon, steelhead and trout.  I have found this material to be incredibly strong, and because it is so abrasion resistant it allows me to step down to a lighter leader such as 25 pound for spring Chinook and 40 pound for fall Chinook.
When I was using nylon leader, I would use 30 pound in the spring and 50 or even 60 pound in the fall.  We use the heavier lines in the fall because the salmon have harder, sharper teeth that will just slice through soft nylon lines.  Since switching to fluorocarbon I have not had a single Chinook bite through the line.
If there were any draw backs to using fluorocarbon line it would have to be that it is so darned expensive.  This is the next generation of fishing line and the fluorocarbon manufacturing process uses the latest technology and in general it’s just more expensive to produce than nylon.
100% fluorocarbon can cost several times more than nylon, but it also catches more fish and lasts at least twice as long.  Maxima fluorocarbon is the only brand that we currently use. There are some cheap fluoro resins available in other lines as well as fluoro-coated nylon lines, but nothing beats using the real thing when you fish for a living or if you live for fishing!

Click here to go fishing with the Total Fisherman Team