Mooching and Drifting for salmon in the Columbia River's Buoy 10 fishery! 12 years ago

How to tie the Double Uni Knot 12 years ago

How to tie the Uni Knot 12 years ago 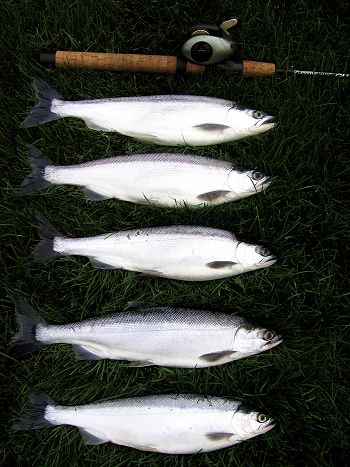 How to catch Kokanee at Lake Merwin

Lake Merwin Reservoir is part of the Lewis River drainage and can be accessed via Hwy 503 that runs through Woodland, WA.
Lake Merwin has two access points for boaters,  Speelyai Bay and Cresap Bay.  Speelyai Bay is the first boat launch that you come to as you drive up Highway 503. Driving directions to Speelyai Bay can be found here: https://www.totalfisherman.com/lake_merwin_map.htm
Catching Kokanee on Lake Merwin is a lot of fun and the average size Kokanee is 13″ to 15″ which makes them substantially larger then those found in Yale Reservoir (the next reservoir up Hwy 503).

Having a fish finder is critical to catching limits of Kokanee.  A good fish finder allows you to locate the depth that the schools of Kokanee are running.
Once you know the depth, then the best way to target Kokanee when trolling is via a downrigger.  If you don’t have a downrigger you can also catch Kokanee using two – four ounce banana/kidney sinkers.  If you’re going the sinker route, make sure you measure your line out via “pulls”.  A pull is the distance of line you can pull from the reel to the first eye on the rod.
I usually find the Kokanee from 17′ to 40′ down, but they can definitely be shallower and deeper.
The standard setup for Lake Merwin Kokanee is a very limber 6.5′ to 8′ trout rod with preferrably a small level wind reel spooled with 30 pound braided line such as Sufix or Tuff Line.  30 pound braid is very thin in diameter and anything less makes it very difficult to deal with because it is too thin and limp. Level wind reels help keep twist out of the main line. 1. Tie your main line to a two to four ounce banana sinker (you want the sinkers that have bead chain swivels attached to them).
2. Next clip a Mack’s Lure Co. Trolling Snubber to the sinker.  This trolling snubber is made from elastic tubing and stretches allowing your gear to give when the fish is fighting and keeps the hook from pulling out of the Kokanee’s soft mouth.

3. You now need to attach the critical fish attracting piece of hardware to your gear.  The “pop gear” also known as “willow spins” “Ford Fenders” etc are a series of spinning metal or mylar blades attached so they can rotate around  a two to three foot thin gauge cable.  I personally prefer the willow shaped blades that are silver or half silver and half brass.

4. Next comes your leader. I like to run Sufix or Seaguar fluorocarbon in the 6# to 8# line class, and hook it to a wedding ring spinner rig.  I like the green or red beads for the spinners.  Sometimes the fish definitely show a preference for bead color so don’t be afraid to mix it up with other colors as well.  I have found the brass or silver colored blades to work the best.  I have had poor success with the butterfly wing shaped plastic blades.

One of the tricks that I have found to be super useful is to replace the standard single hook that the wedding ring spinners come with, and replace them with a hand tied double hook rig.
This rig is similar to those used for trolling herring for salmon, but instead of large hooks, I use  size 6 Red Gamakatsu Octopus hooks.  I tie these as a a solid tie rig with the bend of the top hook touching the eye of the bottom hook, these are tied so there is no gap between the hooks.
5.  The last and most important piece is the bait!  I have tried several kinds but this is the one that works best … “Green Giant White Shoepeg Corn”.

Don’t try regular yellow corn, trust me on this one.  White Shoepeg Corn is what the Kokanee want!  I also think it’s really important to take the corn and drain the liquid off the night before, dump it into a plastic container or bag, and give it several drops of pure Anise Oil (don’t get the cheap baking Anise in your grocery store, it’s cut with alcohol and doesn’t work nearly as well) a bottle of pure Anise Oil will last you years of fishing.

Kokanne really like the smell of Anise Oil!  Put one or two pieces of corn on each hook and you will be set!  The corn can be frozen and kept for the next trip as well.
Kokanee can be found throughout the lake.  It is a big lake and finding them can be difficult for beginners, don’t be afraid to go to where you see other anglers fishing. You will know quickly if they are into the fish because you will see them being caught.  If Kokanee aren’t being caught, don’t be afraid to try the area in front of Campers Hideaway, which is across the lake and to the left when you come out of Speelyai Bay (Camper’s Hideaway is the private campground on the opposite side of the lake from Speelyai Bay, they also have a small dock which will help you to identify it’s location).
Another good location is when you come out of Speelyai Bay and turn right, fish the middle of the lake or closer to the North side of the lake where the waterfall dumps in.
These have all been tried and true locations.  If you’re not seeing fish on the fish finder and you aren’t getting bit on near the surface then don’t be afraid to experiment and try other locations in the lake.
Lastly, make sure you troll slooooowwwww!  .8 to 1.2 mph (GPS gives you the speed) and zig zag back and forth in your troll.  Kokanee will often bite in the turn.  A slow back and forth troll is deadly on Lake Mewin Kokanee!

Steelhead is the only item on the menu for most winter fisherman but not for me!

Let me introduce you to winter Cutthroat Trout  fishing on Lake Washington!

I was fortunate enough to learn this fishery a few years ago and I have not looked back since. This is a great fishery that not many people  choose to fish. Lake Washington is close to Seattle and only has a dozen people that fish the lake regularly.

Lets talk about the basics for the Lake Washington trout fishery. This is a troll fishery that requires nothing more than a downrigger and a good light action trout rod. My rod of choice is an Okuma SST Kokanee rod 7’6″ in length with a palm size reel spooled with 10lb P-Line.

Herring is my bait of choice for these winter trout. Sockeye smolts are present in the lake from winter to spring and these trout gorge themselves on them. I like to run orange label herring in a basic salt brine. To make the brine, I use kosher salt and distilled water and then add the frozen herring to the brine eight hours prior to fishing. I put two buckets in the bait cooler, both with the salt water brine. In one bucket I will sometimes throw in some green bait dye to color up the herring. On a tough day of fishing the addition of color to your bait can often put more fish in the net.
The set up for these trout could not be more simple. Run the herring on a solid mooching rig with hooks to match the bait size.  From your main line tie on a six bead-chain swivel then tie on your leader. Add the herring and your off and trolling.
These trout seem to be real boat shy so let your gear out 100′ and then attach it to your downrigger clip. As far as the downrigger clips go be sure to switch over to the small trout size clips because the trout can’t pull the line from the big salmon size clips. This might seem like a small detail but details catch fish and being lazy won’t.
With the lake temperature dropping the fish will begin to slow and not want to use much energy to find a meal, so you need to put the bait right in the path of the fish. Watch your electronics close and keep working your gear to stay in the money zone. I like to start out fishing at about 1.4 to 1.9 mph and adjust accordingly. If you’re marking fish and not getting bit, switch something up. Speed up or slow down, switch out your bait or add some new scent. You need to keep working to keep catching.
I hope this inspires you to try something new this year and you never know, you might just help save a few steelhead from the dinner table!