Mooching and Drifting for salmon in the Columbia River's Buoy 10 fishery! 10 years ago

How to tie the Double Uni Knot 10 years ago

How to tie the Uni Knot 10 years ago 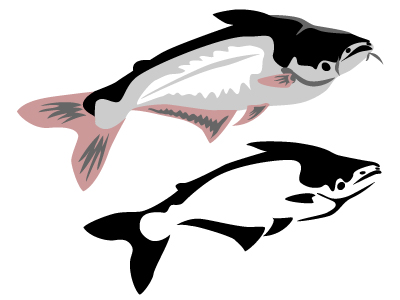 People use the names Swai, Basa or Pangasius interchangeably. They believe all these names refer to the same type of fish. However, this is not the case.

These names describe the two different species of fish farmed in South Asia.
Pangasius Hypophthalmus – Tra, Iridescent Shark – is known to the aquarists for its shimmering skin.
Pangasius Bocourti – Basa Fish – is known to the Asian connoisseurs.
While these fish are difficult to tell apart and frequently get mixed in the local supermarkets, there are some significant differences between them. This article will look at both fish species.  It will explain how they behave in their natural habitat, how they are farmed, and how they impact the local ecology.
The Iridescent shark is a native species of the freshwater, tropical fish from Mekong and Chao Phraya, the two large Asian rivers. Commercial breeders introduced this animal to other rivers and large ponds in Thailand, Laos, Cambodia and Vietnam to grow them for export.
These fish are omnivorous. This means that they eat plants, as well as any smaller fish and crustaceans. They can tolerate a wide range of water hardness, as long as the pH value stays in the 6.5 to 7.5 range. Tra Catfish like to inhabit the wide areas of deep, murky water. They can survive in the warm waters with a low level of oxygen, thanks to an increased amount of red cells in their blood. They are also able to directly breathe air, when necessary

Tra migrate along the streams every year to breed. During the season of rain, when the water level rises, adult fish travel upstream to mate. When the high waters recede, the iridescent sharks return downstream. As this behavior is related to the seasonal weather and water level changes, the timing of the journey differs in the various geographical areas and river basins.
Iridescent sharks are slender fish with dark fins. Young specimens display the black stripe on their bodies. It disappears with time, so that the adult fish are uniformly gray. There’s an albino variety of Tra as well. These fish have no scales. A smooth and shiny skin of the youngsters displays the iridescent sheen, hence the name – iridescent shark. However, these fish are not related to true sharks. They are a species of catfish, Pangasius Hypophtalmus; that can grow up to 4 feet (130 cm) and weigh up to 97 pounds (44 kg) in their natural habitat.

Aquarists often see iridescent sharks in their local fish shops and try to introduce them to  hobby fish tanks. However, their size and nervous disposition excludes these creatures from any, but the largest tanks. The tank should be at least 40 feet long to grow a group of these beautiful, yet large fish, safely.
Basa fish, also known as Vietnamese River Cobbler, come from the same geographic area as an iridescent shark. This species of a catfish eats mainly plant matter. These animals live in fresh water and can also tolerate brackish water. They enjoy swimming in the strong river currents. While Basa Fish are less sturdy and grow more slowly than iridescent sharks, their meat has superior taste and better nutritional value. Basa require higher quality water and more dissolved oxygen than Tra to survive. Therefore, they cost more and remain less popular than Tra.
Mating habits of the Basa Catfish species correlate with the annual flooding of their rivers. The fish eggs get stuck to the roots of the trees, growing along the edges of a river. After 24 hours, they hatch and float downstream.
Basa fish sport a heavy build with a broad head. Their muzzle is decorated with a white strip. Basa’s light belly contrasts with a dark gray back. These fish can grow up to almost 4 feet in their natural habitat.
The meat of Swai Fish is very popular with consumers all over the world. These species of catfish provide important export value in Asian countries, such as Thailand, Nepal, Pakistan, India, Bangladesh, Vietnam, Laos, Myanmar, Indonesia, and Cambodia. As the natural population of Swai does not supply enough meat to satisfy the huge demand, professional breeders grow these fish in captivity.

Aquaculture takes place in large ponds, as well as in fish pens and huge cages placed in the streams. Pangasius Hypophthalmus is responsible for over 90% of the trade in the meat of Swai Catfish species, as it’s easier and faster to grow commercially than pangasius bocourti. The fish are harvested with the nets when they weigh about 2-6 pounds.
Many consumers believe that Swai meat is unclean, contaminated and dangerous to consume. Therefore, they avoid these fish altogether, even though the Swai fillets tend to be quite inexpensive. Let’s see if these fish are really poisonous. Is it possible to minimize the health risks, while enjoying the frugal, tasty panga fillets from a local fish market?
The Mekong River is one of the most polluted waterways in the world. Numerous factories get rid of the chemical byproducts, dumping them into the streams. While pangasius fish can survive in such an extreme environment, they absorb all these contaminants. As omnivores, they eat whatever is available in the environment. Some breeders feed the fish trash and rotting matter to cut down the cost of the Swai aquaculture. Pangasius fish bred in such circumstances, indeed, contain the toxic chemicals.
Injecting the fish with hormones helps to stimulate their growth. Certain breeders are able to make their fish grow four times as fast as they do in the natural habitat. Frequent use of antibiotics serves to control disease but can lead to the contamination of meat and development of antibiotic resistant pathogens.
However, reliable farms utilize the clean areas of the rivers or breed the fish in artificial ponds. Frequent water changes and filtration maintain the quality of water, so that the fish avoid absorbing the pollutants. Trustworthy breeders feed the fish food scraps, dedicated fish pellets and rice bran. The carefully selected diet leads to healthier fish and improves the quality of their meat. Limited use of the antibiotics allows them to break down, instead of accumulating in the bodies of Pangasius Catfish.
To choose the safe, healthy fillets, look for the fish imported from any known, reliable commercial aquaculture. If the farm is not mentioned on the packages, check if the meat has been tested for the presence of the antibiotics and contaminants. Try to avoid panga fillets of unknown origin, as there’s a good chance that they are imported from these shady farms. The responsible shopping habits serve to reinforce the correct commercial breeding techniques. They protect the consumers from ingesting the toxic ingredients.
How do the commercial fisheries impact the natural habitat? There are a few risks of the negative influence of the Pangasius farms. Excessive use of the land areas and water supply can divert them from the ecosystem or the needs of the local communities. Organized planning regarding the placement and density of the Swai farms can minimize the negative influence of fish breeding on the natural habitat.
The Swai aquaculture requires many frequent water changes to maintain the health of the fish population in the ponds. This can mean releasing dirty water into the environment, with the results similar to the effects of the pollution with fertilizers. However, efficient water filtration systems can protect the water supply from getting contaminated by the excessive fish waste.
When the Swai Fish multiply in the non-native rivers, there’s the risk of the runaway specimen starting to breed on their own and disturbing the balance of the local ecosystems. Pangasius fish often out-compete native species of animals, as these fish are wide ranging and able to handle extremes in environment. That’s why farming Swai in fish ponds is safer for the environment than utilizing cages placed in the rivers.
Pond cultivation prevents the fish diseases from transferring to the local wild populations as well. While commercial farming of the Swai Fish can negatively impact the environment, ecological breeding methods neutralize the potential problems. Supporting the sustainable farms promotes the local economy of the developing areas, while protecting the environment.
The Swai Fish include two different species of catfish. Pangasius Hypophthalmus, also called the iridescent shark or Tra, plays a significant role in the kitchens all over the world. It’s the important export good in many Asian countries. Young specimen, appreciated for their shimmering skin, decorate the huge freshwater fish tanks.
Pangasius bocourti, called basa, provides more tasty meat. However, it’s more difficult to breed, as it grows slowly and requires the clean water.
While both species provide specific challenges to the sustainable management of natural resources, thoughtful solutions allow these fish to be farmed while protecting the precious habitats, local economies, as well as the health of the consumers all over the world.